Britain had said on Monday it would expel four Russian diplomats and halt co-operation in easing visa regulations because of Moscow’s refusal to extradite Andrei Lugovoi, the prime suspect in the poisoning of Alexander Litvinenko in London in November.

Interfax news agency quoted a Russian embassy source in London as saying Britain had presented a list of the four diplomats it wanted expelled.

“These diplomats hold middle-ranking positions,” the source said, adding that London was not insisting they leave in 24 or 48 hours.

British prosecutors have accused Lugovoi of carrying out the poisoning and have demanded his extradition to face trial in Britain.

Russia has refused, citing a constitutional ban on extraditing its own citizens.

Grushko said: “These sanctions are used to politicise Litvinienko’s case. This is a direct confrontation.”

The Russian media described Britain’s response as a declaration of diplomatic war.

Grushko also accused Britain of double standards for punishing Russia while itself ignoring numerous Russian extradition requests.
“Over the past six years, Moscow has sent Britain 21 extradition requests, but not a single suspect has been extradited.
“The suspects included fraudsters, killers, terrorists, drug dealers and persons involved in especially serious embezzlement of funds. Six of the people mentioned in the requests have been granted political asylum in Britain.”
Litvinenko, who held British citizenship and who had become a critic of the Russian president, died an agonising death in a London hospital after being poisoned by highly radioactive polonium.
Source: News Agencies 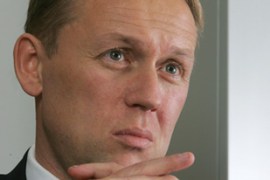 Russia has refused to extradite the main suspect in a spy murder case.