The picturesque city was paralysed by political upheaval for five months in 2006, when demonstrators seized control of the downtown and prevented the Guelaguetza festival from being held.

The state government has vowed to defend the stadium and put on this year’s Guelaguetza, an annual weeklong celebration of Indian music, artisan crafts and cuisine that dates back to the 1700s and draws tens of thousands of tourists from around the world.

“About 200 people wearing masks and carrying sticks, stones and bottle rockets began to provoke the police,” the Oaxaca state government said in a statement. “The police repelled the attack using tear gas.”

The Mexican League for the Defence of Human Rights accused police of “brutally beating” the demonstrators and roughing up several reporters.

It said about seven people were detained, and witnesses said several were hit by flying rocks and tear gas canisters.

Sergio Segreste, the state public safety secretary, said 30 people were arrested and 15 policemen injured, but offered no information on injuries to protesters.

The unrest began as a teachers strike in May 2006, but quickly evolved into a broader protest as a coalition of leftist groups demanded that Oaxaca governor Ulises Ruiz be ousted.

Ruiz denies allegations of rigging his 2004 election and sending armed thugs to attack his enemies.

There was a resurgence in protests on November 2, when holdouts manning barricades around a local university tossed petrol bombs at police, and dozens were injured.

In May, the National Human Rights Commission blamed both the authorities and protesters for “excesses” during the conflict. 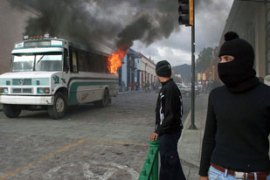 Demonstrators have vowed to re-establish a protest camp destroyed by police.