Kurdish suffering
The judge, Mohammed Oreibi al-Khalifa, said al-Majid was convicted of genocide, crimes against humanity and war crimes for ordering the army and security services to use chemical weapons in the campaign.

As he was led out of the court, al-Majid said: “Thanks be to God.”

The court has 10 days to forward all relevant documents to a  nine-judge appeal panel that automatically reviews all life or death  sentences.
If upheld, the sentences will have to be carried out within 30  days of the decision but there is no time limit for the panel to  certify the verdicts.
‘Important sentence’
Hoda Abdel Hamid, Al Jazeera’s Iraq correspondent, said: “For the Kurds it is the most important sentencing.
“For some people he is much more guilty than Saddam Hussein himself.
“What they really wanted was for the trial to be held in Kurdistan and now they want the sentencing to be carried out there.
“Kurds feel that the trial brought about recognition of their suffering and what happened there.”
However, Jassim Azawi, presenter of Al Jazeera’s Inside Iraq programme, said outside of Kurdistan, most Iraqis would not be focusing on the verdict.
He said: “For most Iraqis, who are caught up in this bloody civil war, this will really be just a footnote.”
‘I am innocent’
Sultan Hashim Ahmad al-Tai, the former defence minister, was also sent to the gallows for ordering attacks on civilians and for ordering the use of chemical weapons.
“I will not say anything new, but I will leave you to God. I’m innocent,” al-Tai said as a guard escorted him out of the room after the verdict.
Hussein Rashid Mohammed, the former deputy director of operations for the Iraqi armed forces, also was sentenced to death for drawing up military plans for the campaign.
Mohammed interrupted the judge as the verdict was being read, insisting the defendants were defending Iraq by acting against Kurdish rebels accused of supporting Tehran during the 1980-88 Iraq-Iran war.

Two other former officials – Farhan Mutlaq Saleh, former head of military intelligence’s eastern regional office, and former director of military intelligence under Saddam Hussein, Sabir al-Douri, were sentenced to life in prison.
Charges were dropped against Taher Tawfiq al-Ani, the former governor of Mosul and head of the Northern Affairs Committee, because of insufficient evidence.
On Trial
During the Anfal (Spoils of War) campaign, thousands of villages in the Kurdish north of Iraq were declared “prohibited areas” and were destroyed.
Thousands of villagers were deported, many executed.
Mustard gas and nerve agents were used to clear villages, earning al-Majid a nickname “Chemical Ali”.
Many of those killed in the poison gas attacks were women and children.

Al-Majid is the only individual, besides Saddam, to be charged with genocide over the Anfal campaign, which the prosecution says killed 180,000 people, mostly civilians.

Earlier in the trial, Al-Majid said he had the right to order the attacks.
“I am not apologising,” he said. “I did not make a mistake.”
The five others have been accused of war crimes and crimes against humanity in the case.
Ahead of the judgment, the defence team approached Ban Ki-moon, the UN secretary general, to stop the trial because of “errors”.
“I appeal to the UN Secretary General to quickly intervene and save the six accused from execution in the Anfal trial,” Khalil al-Dulaimi, the lead defence lawyer, said in a statement.
“The six are prisoners of war and their trial by the Iraqi High Tribunal was marred by errors and violations of the law.”
Human Rights Watch, a New York-based rights organisation, has also said the trial is flawed.
The rights group pointed to the the Iraqi government’s removal of Abdullah al-Ameri, the first presiding judge, a few weeks after the start of the trial and has raised concerns about “the inability of the defence to call witnesses who feared for their security”.
Saddam had also been accused in the Anfal campaign, but he was executed on December 30 after he was convicted in an earlier trial for the killing of 148 people in Dujail after a 1982 attempt on his life.
Source: Al Jazeera, News Agencies 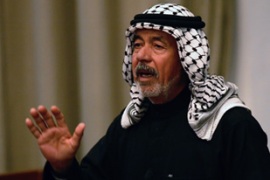 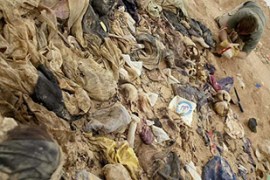 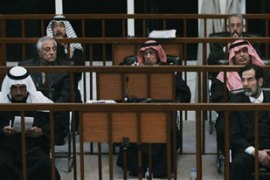 Ali Hassan al-Majid refuses to make a statement at the Anfal genocide trial.