Fayyad is former World Bank employee who has good relations with the West, and Marwan Bishara, Al Jazeera’s senior political analyst, said that he is thought of as a safe pair of hands.

Bishara said: “He is not a strong man in Palestinian society and is not known for his charisma or vision. He is known as a correct accountant, not a reckless investment banker.”

The appeal for dialogue from Meshaal, the chief of Hamas’s political bureau, came at a news conference in the Syrian capital Damascus, where he lives in exile, within hours of an Arab foreign ministers’ meeting in Cairo to discuss the crisis.
Send us your views

If you are in the Gaza Strip, you can also mail your opinions to:
Gazacrisis@aljazeera.net

He said Hamas had no option but to use force to wrest control of Gaza in fighting that killed dozens of Palestinians.

“The lack of security drove the crisis toward explosion. What happened in Gaza was a necessary step. The people were suffering from chaos and lack of security and this treatment was needed.”

Meshaal called for the Palestinian security forces to be reorganised and said elements in Fatah that he did not want to identify were to blame for the lack of security in Gaza.

“We need to restructure the Palestinian security apparatus to be a national force chosen according to merit and not on a factional basis,” he said.

Before the announcement of Fayyad as his replacement on Friday, Haniya said he remained open to dialogue with Abbas.

He said: “I still stress that the door is open to restructure Palestinian relations on the basis of national values.”

Earlier Haniya said that the “unity government” would continue to function despite being sacked by Abbas.

He called his dismissal and the declaration of a state of emergency on Thursday “hasty”.

Chaos
Hamas, now in full control of Gaza, declared clemency for all Fatah members and security forces on Friday, after seizing several senior officials, a spokesman for the group’s military wing said.

Civilians poured into the presidential compound in Gaza City on Friday, hauling away fridges, satellite dishes and doors, as Hamas fighters fired shots into the air in an attempt to disperse them.

Portraits of Abbas and his predecessor, the late Yasser Arafat, lay on the ground as Hamas fighters showed reporters pools of blood where they said two of Abbas’s guards shot themselves rather than surrender.

A Fatah official said the guards were killed.

In another development on Friday, Hamas said it had made contact with the captors of Alan Johnston, the kidnapped BBC journalist, and was taking “serious and practical steps” to win his release.

Abu Obeideh, a spokesman for Hamas, said his group “will not allow anyone to attack journalists or foreigners, because they are helping our people”.

When asked whether the use of force is possible in winning Johnston‘s release, Abu Obeideh said all options are open.

Johnston, 45, was seized in Gaza three months ago by a group believed to have some links to Hamas, and a message purporting to be from his captors has demanded the release of prisoners, including a cleric being held in Britain. 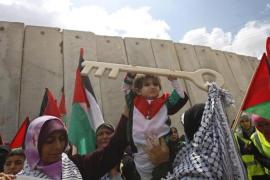 Al Jazeera talks to Palestinians in Gaza about the recent violence and what the future holds. 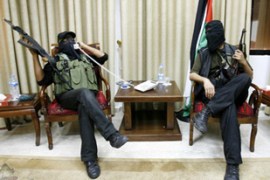 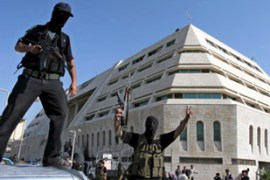 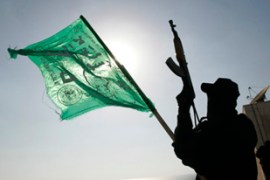 State of emergency is declared after Hamas fighters overrun security compounds in Gaza.