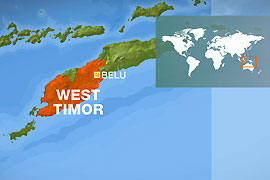 In the eastern Indonesian province of West Timor, a severe drought is causing a humanitarian crisis.

Because of the lack of rain, crops have failed and more than 20,000 children are facing acute malnutrition while hundreds of thousands of people are affected by the drought.

According to WHO standards, the drought can be called a humanitarian crisis because in some areas more than 15 per cent of the children under five are facing acute malnutrition.

After the worst drought in 20 years, farmers have not been able to harvest enough rice  for daily consumption in the mostly rural areas.

More than 60 per cent of the people in this area are depending on their harvest for food.

The drought in West Timor is caused by the weather phenomenon El Nino that has hit this area before.

But this year the rainy season was extremely short.

Climate experts fear that El Nino is likely to happen more often in the future because of the rising sea temperature.

The local authorities are trying to treat malnourished children in so-called feeding centres.

But at the moment the capacity is far from enough.

Many children are still waiting in their villages to be treated while there weight is dropping dramatically.

Also many parents now only eat twice a day.

Villagers have told Al Jazeera that their stock will last another month but after that they will have no more food left.

Already many people only eat fruits and potatoes they can find in the forest.

They say they feel hungry most of the time.

The district chief in the worst hit area in West Timor has asked the government in Jakarta for help. 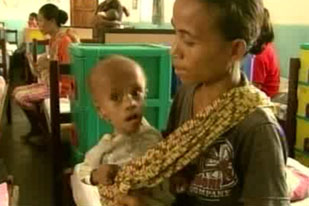 Thousands of children in West Timor are
suffering from acute malnutrition

But the ministry of health says that the situation is not as bad as aid organisations are claiming.

At the moment, government officials mainly try to educate mothers how they can give children a nutritious diet.

According to the government, the hunger is mainly caused by a lack of education.

The aid organisation Care International says that West Timor normally faces a level of chronic malnutrition of more than 60 per cent.

But because of the severe drought this year thousands of children have become acutely malnourished.

Indonesia is normally not a target for emergency food aid because the national figures are not serious.

The drought is happening in specific areas only.