“There is no reason to fear these actions by Russia, they aren’t aggressive. It’s merely a response to tough and unfounded unilateral actions by our partners,” Putin said.
“These actions are aimed at preserving a global balance.”

He also attacked the US and other Nato members for failing to ratify an amended version of the 1990 Conventional Forces in Europe (CFE) treaty, which limits the deployment of heavy non-nuclear weapons around the continent.

Signed and ratified
Putin said: “We have signed and ratified the CFE and are fully implementing it. We have pulled out all our heavy weapons from the European part of Russia to [locations] behind the Ural Mountains and cut our military by 300,000 men.
“And what about our partners? They are filling Eastern Europe with new weapons. A new base in Bulgaria, another one in Romania, a [missile defence] site in Poland and a radar in the Czech Republic.

“What are we supposed to do? We can’t just sit back and look at that.”

Putin’s comments came a week before he meets George Bush, the US president, and other leaders of the Group of Eight (G8) industrialised nations at a summit in Germany.

Gordon Johndroe, US national security council spokesman, said: “While we have some differences, they are nothing other than issues that can be worked out through the continued dialogue we have face to face.

“The United States and Russia co-operate on a range of issues from counter-terrorism to global energy solutions.”

Moscow has repeatedly rejected US assurances that the planned missile defence installations in Poland and the Czech Republic are meant to counter a potential threat from nations such as Iran and pose no danger to Russia. 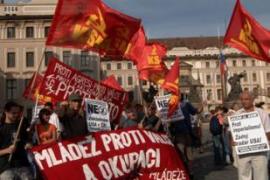 Rocket could penetrate defence shields such as the planned US one for Europe. 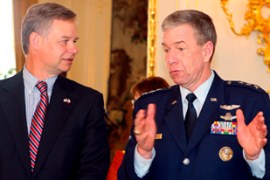 Russia cold on US missile plan 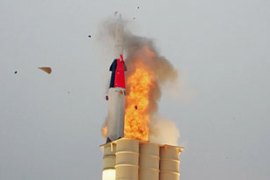 Russia: No missile threat to Europe

Foreign minister says US concerns over “rogue states” are imaginary. 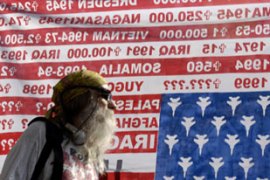 Czechs rally against US radar base

Demonstrators demand referendum on plans for anti-missile shield in their country.