Abu Sali Taha, spokesman for Fatah al-Islam, said that they were ready to “respect a ceasefire” in order to help the residents of the camp which troops have been shelling since Sunday.

But shelling and gunfire resumed from both outside and inside the camp less than an hour later.

Civilians took advantage of the short-lived truce to flee the camp flying white flags from their cars while other urged journalists to help them to safety.

Two other ceasefires in the past three days have also collapsed shortly after being agreed and more than 80 people have been killed in the country’s worst internal violence since the 1975-1990 civil war.

The 40,000 Palestinians living in Nahr al-Bared are reportedly running out of supplies as the refugee camp remains virtually under siege.

“There is very clearly a big demand for assistance in the camp at the moment. Water is a major issue, food and medical supplies will be a major issue very soon,” Sven Berthelsen of UNRWA, the agency that cares for Palestinian refugees, told Al Jazeera.

“We are very concerned about the potential spread of disease as sanitational systems are not functioning problems and water supplies are not adequate.”

He added that the agency would try again on Wednesday to get aid to the people trapped in the camp.

Medical sources have been calling for a halt to the fighting so they can reach the dead and wounded on the streets.

Omar Keenan, a doctor in one of the camp’s medical centres, told Al Jazeera the situation was a “disaster”.

“There are severe casualties. We are in need of blood, our blood bank is empty. We are performing operations on the floor. These medical centres have come under fire and people are crying out for help. We have no ability to cope. The number of casualties is in the hundreds.

Elsewhere in Tripoli on Tuesday, a member of Fatah al-Islam blew himself up as security forces raided a building in the northern city, a senior security official said.

The man detonated an explosives belt after officers ordered him to surrender in the northern neighbourhood of Mitayn, the official said on condition of anonymity.

Sheikh Salim Lababidi, mufti of Palestinians in Lebanon and the diaspora, appealed through Al Jazeera for the world to open its eyes to what is going on in the camp in Lebanon.

He said: “People inside the refugee camp have contacted me, saying that more than 100 civilians have been killed and injured in the camp.
“We have all denounced the killing of army soldiers, but no one has denounced the killing of dozens of these civilian Palestinians. Why are they being killed and shelled?”
Sultan Aboul Aynan, the Lebanon chief of the mainstream Fatah from which Fatah al-Islam splintered off, called for a halt to the army’s bombardment, warning that civilians were paying the price for the actions of “a gang of outlaws”.

Ban Ki-moon, the UN secretary-general, condemned the attack on the UN aid convoy and demanded an end to Fatah al-Islam’s attacks on the Lebanese army.

“These actions constitute an assault on Lebanon’s stability and  sovereignty, and have seriously endangered civilians. They must halt  immediately,” Michele Montas, Ban’s spokeswoman, said in a statement.

The Arab League condemned the “criminal and terrorist acts committed by the so-called terrorist group Fatah Islam against the army, Lebanese security forces and innocent citizens.” 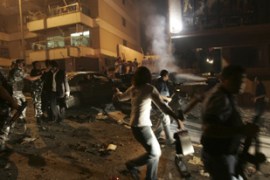 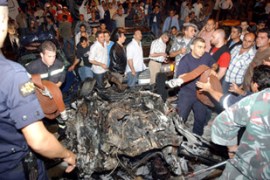 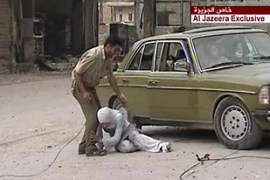 First pictures inside the refugee camp being shelled in northern Lebanon. 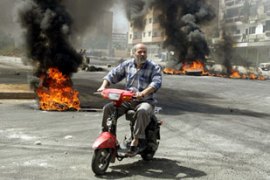 Palestinians set fire to car tyres in protest at the shelling of Nahr al-Bared.