Tzipi Livni, the Israeli foreign minister, has called on Ehud Olmert to resign the post of prime minister and said she would seek to take over as leader of the Kadima party.

She said: “Kadima needs to choose its leadership in a democratic manner … and when the time comes I plan to submit my candidacy.

“Now is the time to restore the public’s trust in the government.”

Livni, born in Tel Aviv on July 8, 1958, is a leading member of the Kadima Party, the largest party in the Israeli parliament.

She is Israel‘s second woman foreign minister, after the late Golda Meir. And many Israelis would like to see her, like Meir a generation ago, go on to become prime minister.

She has largely eluded the scandals that plague Olmert and other senior ministers, and has also escaped domestic recrimination over last summer’s war in Lebanon.

Livni comes from a well-known “ultranationalist” family but has endorsed withdrawal from some occupied Palestinian lands as a pragmatic way to preserve Israel‘s Jewish majority – if not to achieve a peace agreement.

First elected to the Knesset as a member of the Likud party in 1999, her father, Eitan, led the armed underground group Irgun in the 1940s that fought for an exclusively Jewish homeland in Palestine and opposed partitioning the territory with Arabs.

Livni renounced any such views after defecting from Likud and joining Ariel Sharon, then prime minister, in forming Kadima in 2005.

She said: “I came to the painful realisation that if I have to choose between a Greater Israel and Israel continuing to be a Jewish and democratic country, I must choose the latter.”

The married mother of two served as justice minister under Sharon, and was a key member of the team overseeing Israel‘s disengagement from Gaza.

Amotz Asa-El, a political analyst, said: “There is a leadership crisis in Israel, and Livni is seen as the possible answer.

“The modesty she evinces is an asset given the growing exasperation with a political establishment that is too macho in tone and often criminal in action.”

She came to politics just over a decade ago, following a stint in the Mossad foreign intelligence service – as a legal adviser, some say, while others speculate that she helped hunt Arab enemies abroad – and then a career as a corporate attorney.

At times outspoken, she once called Mahmoud Abbas, the Palestinian president, “irrelevant”.

Critics suggest that, as premier, she would have to work hard to make up for matters of state where she lacks expertise.

Asa-El said: “Livni has proven herself in leadership situations but that is not the same as proving herself as a leader.” 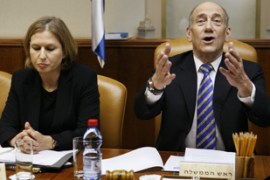