But those statements appeared to be a repeat of claims that Vanunu made in his original unauthorised 1986 interview with Britain‘s Sunday Times, for which he was jailed as a traitor for 18 years.

The original disclosures all but destroyed any secrecy that remained around an assumed Israeli atomic arsenal.

Since his release Vanunu has campaigned for the disarmament of the Jewish state and he denies claims by Israeli officials that he has more secrets that he could divulge if allowed to emigrate.

“All that I want is to be free, to leave the country,” Vanunu, 52, told reporters at the magistrates’ court in Jerusalem.

The court found him guilty of giving interviews to international media outlets over the past three years, defying a government order on him to limit contacts with foreigners.

A sentencing hearing was set for May 18.

His  lawyer said Vanunu would probably appeal against the ruling.

Michel Sfard said: “We should be clear here that Vanunu was convicted for the very act of speaking to non-Israelis, rather than the content of those conversations.

“We do not consider this appropriate for a democracy in the 21st century.”

Sfard said he had been told by Israel’s interior ministry that the travel ban on Vanunu had been extended by another year.

“I plan to meet with the interior minister on this issue, which we hope will be reconsidered,” Sfard said.

Israel neither confirms nor denies having the Middle East‘s only atomic weapons under a policy of “strategic ambiguity”.

He has also said that the Jewish state has no right to exist. 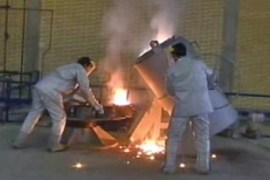 Does the push for greater sanctions against Iran point to double standards when Israel admits having nuclear capability?

Nuclear whistleblower Mordechai Vanunu did not violate a government-imposed ban on foreign travel by entering Palestinian Authority territory, an Israeli court has ruled.

Nuclear whistleblower Mordechai Vanunu has been re-arrested by Israeli police for passing on classified information to unnamed international parties.

Israel’s nuclear whistleblower Mordechai Vanunu has said he wants to be a Palestinian citizen and was planning to present his request to Palestinian leader Yasir Arafat.