“This case is totally false and fake,” she said.

Mir Ali Reza, a magistrate, ordered the suspension a day after he issued the warrant in connection with the deaths of four protestors during violent demonstrations in October.

Meanwhile there were conflicting reports on Monday over whether Hasina’s longstanding political rival and fellow former prime minister, Khaleda Zia, was preparing for an imminent departure into exile in Saudi Arabia.

A source close to her family said that Zia’s belongings were packed at her house in Dhaka where she has been under virtual arrest for the past week.

However the Bengali-language daily Naya Diganta, which is close to Zia’s political circle, said there was still “uncertainty about Khalada Zia going to Saudi Arabia” as authorities had planned.

Military intelligence sources told Reuters that “She [Khaleda] has conveyed her final decision [to the government] not to go abroad in a while,” said one official, who asked not to be identified.

Khaleda’s close associates reportedly said the 60-year-old former premier was ill with low blood pressure and knee pains, and “she will not go out”.

Zia is reported to have agreed to leave the country in return for leniency for her two sons.

Zia and Sheikh Hasina, are accused of years of misrule that ended in cancelled elections and the imposition of a state of emergency earlier this year.

The interim government under the former central bank chief, Fakhruddin Ahmed, has banned party activity since declaring emergency rule in January and pledged to clean up Bangladesh‘s notoriously corrupt and dysfunctional political system before holding new elections before the end of 2008.

Speaking from Al Jazeera’s studio in London, Hasina she would fight any charges against her.

“I have not committed any such crime, they cannot put all these false cases against me so I will fight it.”

She denied any responsibility for the deaths of protestors in October  allegedly caused by supporters of her Awami League party.

“Demanding your constitutional right is not a crime. We were fighting for free and fair elections,” she said. 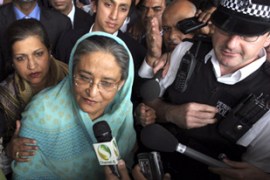 Sheikh Hasina is blocked from boarding a flight home to Bangladesh from London. 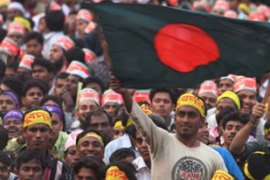 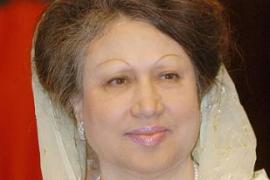 A second son of Khaleda Zia, the former Bangladeshi PM, has been arrested.