His comments came as the US defence secretary told Iraqi leaders that US support for the country was not an “open-ended commitment”.

Robert Gates was speaking as he left Tel Aviv for his first visit to Iraq since the US decided to send an extra 30,000 troops to the country in what the Bush administration has labelled a troop surge.
On Wednesday at least 180 people were killed in a series of bombings in Baghdad, with one blast near a market killing more than 140 people – the deadliest single bomb attack in the capital since the US-led invasion in 2003.
On Thursday, the violence continued when a suicide car bomber rammed into a fuel truck, killing 12 people and injuring 24 others in the Jadiriya district of Baghdad.
Angry reaction
Reid’s comments drew a swift response from the White House and an angry reaction from Republicans in congress who accused the senate majority leader of turning his back on US troops.

“I can’t begin to imagine how our troops in the field, who are risking their lives every day, are going to react when they get back to base and hear that the Democrat leader of the United States senate has declared the war is lost,” Senator Mitch McConnell, the senior Republican in the senate, said.

Reid’s assessment of the situation in Iraq came before the House of Representatives voted 215-199 to uphold legislation ordering troops out of Iraq next year.
Bush did not directly address Reid’s comments.
However, a White House spokeswoman quickly fired back that they were at odds with US military assessments of the two-month-old effort to quell sectarian violence in Iraq.
“If this is his true feeling, then it makes one wonder if he has the courage of his convictions and therefore will decide to defund the war,” Dana Perino said as Bush called for his plan to be given time to work.
Funding row

Locked in a bitter row with Democrats over emergency war funding, Bush said that no crackdown could ever fully banish such attacks such as the ones that took place in Baghdad on Wednesday.

“If the definition of success in Iraq – or anywhere – is ‘no suicide bombers’, we’ll never be successful,” he told an audience at a high school in Tipp City, Ohio.
“I’m optimistic we can succeed. I wouldn’t ask families to have their troops there if I didn’t think, one, it was necessary, and two, we can succeed. I believe we’re going to succeed,” he said.
Democrats, who owe their control of the US congress to deep US public anger over the war, have tied timetables calling for a withdrawal of US combat forces from Iraq in 2008 to a $100bn emergency war funding measure.
Bush, who has vowed to veto any measure with a deadline, warned on Thursday that “the very radicals and extremists who attack us would be emboldened” by a hasty US withdrawal, and violence could spread beyond Iraq’s borders.
The version of the funding bill in the House of Representatives would pull US combat troops out by September 2008.
The senate version would begin getting US forces out in mid-2007 with the goal of having most of them withdrawn by March 31, 2008.
Source : News Agencies 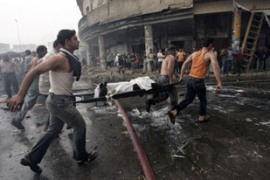 Car bombings kill more than 180 in blow to US-led security crackdown on capital. 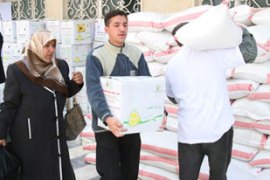 Ban Ki-moon asks countries to share the burden as 50,000 Iraqis leave every month. 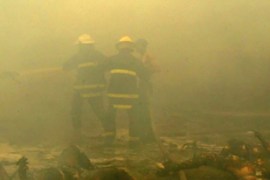 Multiple car bombings kill over 160 in blow to the security crackdown in Iraq’s capital.