Hassoun, who has lived most of her life outside Iraq, beat three other finalists – men from Egypt and Lebanon and a woman from Tunisia.
She told CNN: “I really want to thank them so much. Iraq. All Iraqi people for voting to me, for their love to me, because I can feel it.
“I can feel them, like, really happy and smiling, especially in that situation they’re living. That’s why it’s my dream to make them happy,” she said.
Religious fans
Iraq’s al-Sharqiyah satellite channel devoted hours of live coverage to Friday’s broadcast on a Lebanese channel, urging Iraqis to vote for Hassoun and broadcast a phone-in programme for her supporters.
Some fans called to say they had voted for Hassoun so many times they had used up the credit on their prepaid phone cards.
During commercial breaks, Sharqiyah broadcast a government advertisement that seeks to discourage sectarian violence.
It shows an elderly woman in a black chador in tears and pleading with masked gunmen not to evict her and her family from their home.
Even in the deeply religious Shia city of Najaf people were delighted.
An Islamist politician, Sabah Ahmed, said: “We welcome this woman because she has held the name of Iraq aloft. We needed a voice to unify us.”
“Being an Islamist, I have some reservations about singing. But seven million votes for this woman from walks of society. With this percentage she outclassed politicians in Iraq. Therefore the victory unites Iraqis,” he said.
Source : News Agencies 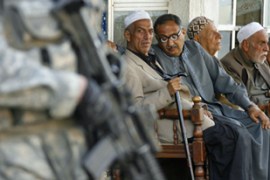 Moqtada al-Sadr, the Shia leader, repeats call for US forces to withdraw from Iraq. 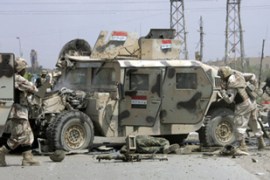