The meeting between Sir Peter Ricketts, a senior aide to Margaret Beckett, the British foreign secretary, and Rasoul Movahedian, the Iranian envoy, was described by a department spokesman as “brisk but cordial”.
Shortly afterwards, Beckett demanded that Tehran fully explain the detention, saying that Movahedian “was left in no doubt that we want them back”.
British officials declined to confirm whether Movahedian had offered any assurances that the personnel would be released.
‘Routine boarding’
Earlier, the MoD said in a statement: “At approximately 10:30 Iraqi time this morning, 15 British naval personnel, engaged in routine boarding operations of merchant shipping in Iraqi territorial waters … were seized by Iranian naval vessels.
“The British government is demanding the immediate and safe return of our people and equipment.”
The Britons were in two inflatable boats from the frigate HMS Cornwall during a “routine smuggling investigation” when they were seized, the US defence department said.
No US military personnel were detained.
The abduction of the British servicemen came as the UN Security Council prepared to vote on new sanctions aimed at forcing Tehran to curb its nuclear programme.
Past incident
In June 2004, six British marines and two navy sailors were detained for three days in Iran after a routine operation. They were paraded blindfold on television and forced to apologise for their “mistake”.
On that occasion Iran insisted that the boats – which it has not yet returned – were intercepted only after they entered Iranian waters on the Shatt al-Arab that divides Iraq from Iran.

On Friday, an MoD spokesman underlined that the British navy was boarding merchant ships in Iraqi waters in support of UN Security Council resolution 1723.

The spokesman said: “Normally what would happen is that we have the navy ships monitoring vessels going in and out of the area, so we would call them up on the radio and go through a simple list of checks and if there’s anything that’s not right, they send out two boats of naval personnel to board it.
“They check the cargo and see if the boat needs any assistance.”
Fifth Fleet’s account
According to a statement from the US Navy’s Fifth Fleet, which is based in Bahrain and operates jointly with the British forces off the coast of Iraq, the British sailors had just finished inspecting the merchant ship “when they and their two boats were surrounded and escorted by Iranian vessels into Iranian territorial waters”.

Lieutenant-Commander Charlie Brown, also of the Fifth Fleet, said six Revolutionary Guards patrol boats intercepted the two British vessels.
The Iranian boats normally carry bow-mounted machine guns, while the British boarding party carried only sidearms, Aandahl said.
No shots were fired and there appeared to be no physical harm done to any personnel involved or their vessels, Aandahl said.
Disputed waters
The seizure of the British vessels, a pair of rigid inflatable boats known as RIBs, took place in long-disputed waters just outside of the mouth of the Shatt al-Arab, Aandahl said.
A 1975 treaty gave the waters to Iraq and US and British ships commonly operate there, but Aandahl said Iran disputes Iraq’s jurisdiction over the waters.
“It’s been in dispute for some time,” he said.
“We’ve been operating there for a couple of years and we know the lines very well. This was a compliant boarding, this happens routinely. What’s out of the ordinary is the Iranian response.”
Aandahl said the US-led task force has touchier relations with the Revolutionary Guard, who often ignore normal maritime operating traditions, than with the regular Iranian navy.
Source : News Agencies 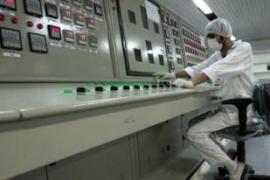