The US justice department said on Wednesday that Chiquita’s payments to the paramilitaries “were reviewed and approved by senior executives of the corporation, to include high-ranking officers, directors and employees,” but identify anyone by name.

Jaime Bernal Cuellar, a former Colombian attorney general, joined opposition politicians in calling for the extradition to Colombia of all those involved.

“A criminal investigation of the people who financed these illegal groups should begin immediately,” he said.

The Colombians particularly want to know whether US prosecutors learned anything more about a November 2001 scheme in which a Banadex ship was used to unload 3,000 Kalashnikov rifles and more than 2.5 million bullets.

The weapons were purchased by the paramilitaries from arms dealers who had acquired them from police in Nicaragua.

Right-wing paramilitary groups were organised as private armies in the 1980s, ostensibly to protect landholders from the left-wing guerrillas who were extorting “war taxes”.

The shipment was revealed in a 2003 report by the Organisation of American States.

Michael Mitchell, Chiquita spokesman, said in an email to The Associated Press on Friday that Banadex had changed its policies as a result of the 2003 report. But he added that “there is no information that would lead us to believe that Banadex did anything improper”.

Colombia’s chief prosecutor’s office remains suspicious however. Giovanny Hurtado Torres, Banadex’s legal representative, is one of the four people who has been convicted over the arms-smuggling scheme.

According to US court documents, Chiquita told the justice department in April 2003 that it was funding the paramilitaries, and then kept paying them for another 10 months with the department’s knowledge.

“My question is: How much more does the US government know about payments to the paramilitaries?” Senator Jorge Robledo, a leading opposition politician, said.

Chiquita’s involvement with the paramilitaries developed at a time when the right-wing groups were growing quickly and deepening ties with politicians, security forces and businesses across Colombia.

In Antioquia state, Chiquita’s business boomed as the groups took over banana-growing lands and were blamed for the killings of human rights workers and trade unionists.

Chiquita, which sold Banadex in June 2004 for about $43.5m, said it was merely trying to protect its workforce in a violent region. 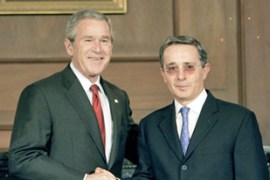 Eight politicians are in jail awaiting trial over alleged links with paramilitaries. 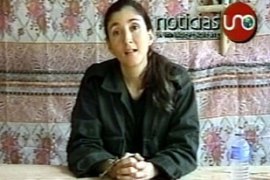 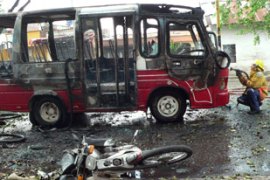 Eight people are badly wounded after a car parked outside a radio station exploded. 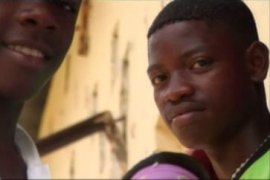 Fighting between left-wing guerillas and paramilitaries forcing thousands to flee.