The industrial zone will now be built elsewhere in the state.

On Wednesday, police opened fire on farmers and political activists, many armed with sickles, after they attacked officers as they tried to enter an area earmarked for the park, officials said.

At least three women were among 14 people killed, increasing pressure on the communist government accused by many of turning its back on the poor farmers.

Siddiqullah Choudhury, chief of the Jamiat-e-Ulema Hind, a Muslim group leading the protests, said: “We have taught the government a lesson they will never forget. You cannot play with the lives of innocent villagers.”

A Bengali-language TV channel showed people dancing in Nandigram as they waved the flags of the leading opposition Trinamul Congress party and shouted slogans.

Many farmers across India are unhapppy about the compensation they are being offered for the land as the country moves towards increased industrialisation.

Despite the protests in West Bengal, India remains committed to developing the special economic zones which are tax havens meant to lure foreign investors and close the gap with Chinese manufacturing. 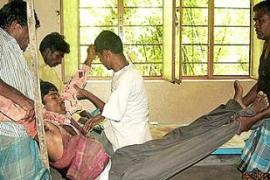 Protesters set a government office ablaze a day after 14 farmers are killed. 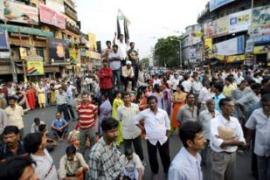