Engineers and geologists have begun work to plug a mud volcano in Indonesia using large concrete balls, but were forced to put the project on hold when a steel cable used to hoist the balls melted and broke.

The plan involves lowering nearly 1,500 concrete balls, each weighing around 250kg, into the geyser at Sidoarjo, near Surabaya in East Java.

Over the past few months a creeping sea of sediment has covered factories, thousand of homes, displaced at least 13,000 people and blocked major roads into Indonesia’s second-largest city.

The advancing, noxious mud led to protests by those made homeless, all demanding that the government take action.

Residents, backed by one independent geological study, claim the mud volcano was caused by gas exploration drilling by the PT Lapindo Brantas company.

The operators reject those allegations, saying it was a natural disaster caused by increased seismic activity following a major earthquake two days before the mud began flowing in May 2006.

However, the company has agreed to pay a total of $420 million to victims and on the operation to stop the mud.

The mud volcano is estimated to be spewing out the equivalent of one million oil barrels per day; engineers hope that by dropping the concrete balls into the geyser they will reduce that by 70 per cent.

Critics doubt it will succeed and warn it could be dangerous or that deep pressure from underground will only force the mud to the surface somewhere else.

Work was postponed on Friday, but the task force successfully lowered the first of 375 chains of four balls into the hole on Saturday, despite heavy rain and high winds.

“Thank God we managed to drop one chain”, said Rudi Movrianto, a spokesman for the government task force, “we had to halt the process because of the broken steel cable. We will continue tomorrow after repairing it”.

“We can estimate that the balls have reached a depth of 500m,” said Satria Wicaksono, a physics expert from the Bandung Instiute of Technology, who is supervising the work.

The method was also used to block a bigger mud volcano in Azerbaijan.

Officials said they had hoped to lower between five and ten chains of balls into the 50 metre-wide crater per day. 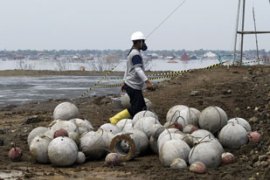 Thousands ask for compensation after their homes are submerged. 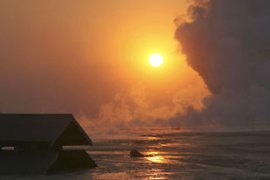 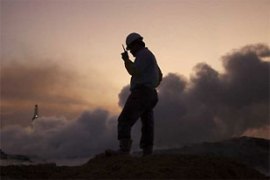 Indonesian official linked to company denies it is to blame for environmental disaster.