Activists armed with slingshots fired rocks at Israeli forces.
Barrier protested
Hundreds of Palestinians showed up to participate in the protest, including citizens of neighbouring villages.
They were joined by dozens of foreigners and Israelis from Israeli peace movements.

Rowland said Israeli soldiers came over to the Palestinian side of the barrier, firing tear gas and chasing demonstrators over a hill.

She said: “Israel troops were still firing teargas at them, even as they went up the hill in retreat.”

A group of protesters continued to hold a sit-in at the site.

Over its two years of protest, Bil’in has become a symbol to Palestinians for its spirit of constant defiance.

Mustafa Barghouti, member of parliament, told Al Jazeera at the protest: “First of all, it has created a very important symbol and model of non-violent, peaceful resistance.”

Barghouti said Bil’in has attracted international attention to Israel’s “apartheid system” and sends a message to Israel that Palestinians would not accept it.

He said the separation barrier was “fortifying colonialism and occupation” and has “destroyed Palestinian health infrastructure, economic and education systems”.

The Israelis call the barrier a security fence but Palestinians refer to it as the Apartheid Wall.

It’s been about five years since Israel began building the massive barrier, which the International Court of Justice has since ruled is against international law.

The protests in Bil’in began when Israeli army bulldozers moved in. 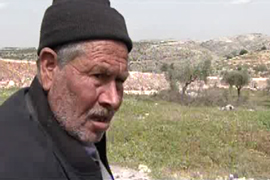 Suliman Yassin has been farming the land around Bil’in for more than 25 years. It provided a living for his extended family.

Three years ago, the Israeli army confiscated most of his farmland and uprooted his olive trees, to make way for the separation barrier.

Yassin said: “When they uprooted the trees that Thursday, I was taken to the hospital, I couldn’t stand it any more. I took a knife, I was about to stab the man driving the bulldozer. We spent a fortune on this land and those trees.”

Now Suliman Yassin can only look at his land through barbed wire.

He says he’s staying – he’s too old to move now. But most of Suliman’s children have left, and he doesn’t expect them to come back.