Union leaders say Conte, a reclusive diabetic in his 70s who has ruled since 1984, is unfit to govern.

They are demanding he appoint a new, neutral prime minister with powers to hire and fire ministers.

They had argued that Conte’s plan to extend martial law would serve only to radicalise popular opposition against him and said their strike would continue until he named a new premier.

“The strike is maintained … this initiative of Conte’s will only radicalise our movement,” Boubacar Biro Barry, union negotiator, said.

Strike leaders had relaunched their stoppage after Conte chose ignored their demands and chose a close ally, Eugene Camara, as prime minister despite having agreed to name a consensus figure.

More than 120 people, mostly civilians, have been killed since the beginning of the year in clashes between security forces and protesters.

The imposition of martial law restored some calm to the former French colony, keeping protesters off the streets by giving the army the right to shoot looters and troublemakers.

Union leaders met with General Ibrahim Babangida, Nigeria‘s former military ruler, who is leading a delegation from the West African regional body ECOWAS to push for a negotiated settlement.

The unrest in Guinea has raised concerns that growing protests could shatter a fragile peace in the wider region, particularly in neighbouring Sierra Leone and Liberia, which are just starting to recover from civil wars.

Ellen Johnson-Sirleaf, Liberia’s president, said Conte must work with all parties to stop the political crisis deteriorating into bloodshed and threatening neighbour states.

“If anything happens to Guinea, it could spill over. All our borders are porous,” she said in an interview in Rwanda. 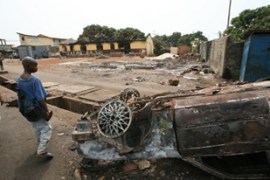 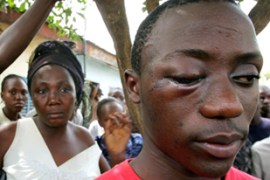 Deadlock remains as international calls for an end to martial law grow. 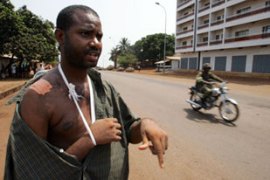 Human rights group accuses the security forces of being heavy-handed with civilians. 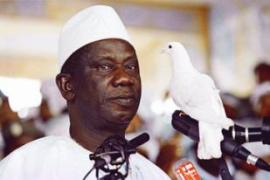 US and France consider evacuating nationals as protests continue against president.