He also confirmed on RTL radio that Merkel and Jacques Chirac, the French president, would discuss the problems at a summit meeting on Friday.
But Germany said the two leaders would not take any concrete decisions that were best left to Airbus management.
Friday’s meeting in Berlin is a Franco-German summit, “not an Airbus summit”, Thomas Steg, the German government spokesman said, at a regular government news conference in Berlin.
He also dismissed the widespread media tally of 10,000 job cuts, apparently confirmed by Villepin, as speculation.
Restructuring
Arnaud Lagardere, who represents a consortium grouping the French government’s 15% EADS stake with his own media group’s 7.5% holding, has told French newspaper Le Monde that the French would defend their interests in Airbus’s restructuring but pledged not to allow disputes with Germany to worsen.
DaimlerChrysler controls another 22.5%.

He said: “Let’s end the hypocrisy of saying it’s the shareholders who are blocking everything over transferring production. If they didn’t do it, then the blockage would arise elsewhere, at the union level or between the governments.”

Airbus on Monday postponed its announcement on job cuts planned for Tuesday, saying European nations could not agree how to share the work on its next aircraft, the wide-body A350.
Bleeding cash
The cost-cutting plans were originally triggered by delays in the company’s A380 superjumbo, which drove Airbus into loss last year and bled cash from EADS.
French newspaper Le Figaro talked of a Franco-German “divorce” while Le Monde said Airbus was paralysed by the “egotism of Paris and Berlin”.
The breakdown in the Franco-German consensus – the latest in three years of bickering surrounding Europe’s biggest aerospace group – highlights sensitivities in both countries over employment and mutual suspicions of protectionism.
Jobs are a key issue in the forthcoming French elections.
“This company is largely Franco-German, very European and there needs to be an equitable distribution of efforts between the countries,” Villepin said.
Equality
German politicians suspect Toulouse-based Airbus’s French management is forcing German workers to bear a disproprtionate share of the cuts.
Airbus employs 20,000 people in each country.
Germany is pushing for more of the cuts to be borne by France on a basis of equality, a source close to the talks said.
“We need to ensure that the French, who practise a very interventionist industrial policy, do not come out of the process as the only winners,” said Rainer Wend, an economic spokesman for the centre-left SPD, part of Merkel’s coalition.
Ditmar Staffelt, SPD member in parliament and former government co-ordinator for aerospace issues, said: “The French are fighting for their jobs and their future role, and we as Germans cannot and should not settle for playing second fiddle.”
Source : News Agencies 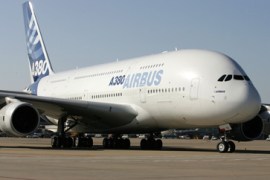 Temporary solution found ahead of the introduction of new wiring design software.

The new head of Airbus, the European plane maker, has said that re-structuring the organisation will cause “painful” job losses among its 55,000 staff during the next few months.

Production troubles will delay the Airbus A380 superjumbo by two years, putting a board meeting at parent EADS under fresh pressure to map out how it will get the $15 billion programme back on track.