Unions staged a general strike last month to demand an independent prime minister, free from the corruption allegations that have marred Conte’s administration.
Violence
Residents of Kankan, an opposition stronghold about 690 km east of Conakry, said thousands of protesters looted shops and raided the houses of government officials.
Oumar Kaba, a local resident, said: “There were several thousand of them. They broke into the houses of government dignitaries to pillage and steal everything.”
Other witnesses, who asked not to be identified, said the governor’s house was looted and one of his bodyguards was killed whilst on patrol in the town.
Thierno Maadjou Sow, president of Guinea’s Human Rights League, said that at least two people had been killed in Conakry’s Taouyah area.
Strike call
Unions have given the president until Monday to name a new consensus prime minister.
Conte had agreed to appoint a new prime minister two weeks ago to end the 18-day nationwide stoppage in which at least 90 people were killed.
Union leaders expressed concern at the rising violence in the former French colony, but stuck to Monday’s deadline.
Ousmane Souare, a union negotiator, said: “We are at a loss because things have started even before we launched our strike call.”
“It is even more worrying because no negotiations are taking place at the moment.” 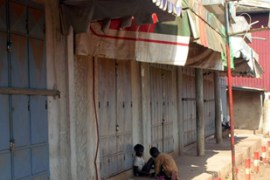 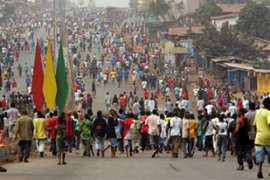 A new head of government is appointed meeting a key demand of the unions. 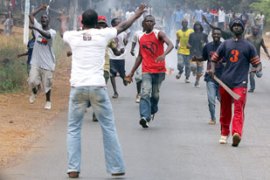 Lasana Conte offers key concession to protesters in a bid to end a 17-day strike.