At least 30 Palestinians have been killed in fighting between Hamas and Fatah since last month, when Mahmoud Abbas, the Palestinian president and leader of Fatah, called for early elections.
Unity talks
The latest wave of violence came one day after Palestinian factions including Hamas and Fatah resumed talks on forming a coalition government.

Ismail Haniya, the Palestinian prime minister and Hamas leader, said the talks were being conducted in a “conciliatory” spirit.
“We hope that such a spirit will continue until we reach the formation of the national unity government,” he said.
The Israeli army said on Wednesday it shot one man and arrested two others as they tried to sneak into Israel from the Gaza Strip.
Palestinian security officials said the three men had been labourers trying to slip into Israel to find work.
The latest death brings to 5,629 the number of people killed since the start of the intifada or uprising in September 2000, most of them Palestinians, according to a count by the AFP news agency.
Source : News Agencies 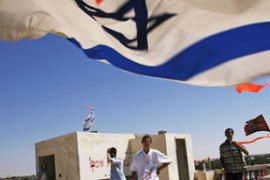 ‘Invisible hand’ of Israel in Gaza

Israeli rights group says the occupation of Gaza continues in all but name. 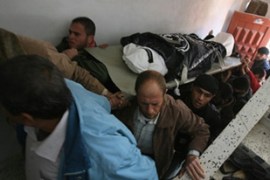 The Israeli army says that it fired on two men seen near the border fence.

Palestinians say those shot were labourers trying to seek work in Israel. 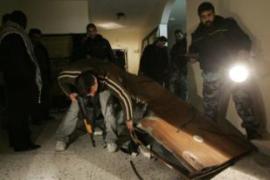