But, he added: “We cannot entirely cancel the voting rights rule because that is the main principle.”
The proposed laws announced on Tuesday had cast fresh doubts on the government’s commitment to attract foreign investment.
Under the existing law, many foreign investors have used nominee shareholders with limited voting rights to retain control of local companies while staying within limits on shareholding.
The draft amendment, approved by the Thai cabinet on Tuesday, still needs final approval from the Council of State, an advisory body that checks the constitutionality of the country’s legislation, as well as the National Legislative Assembly.
This process, say analysts, could take months.
Falling stock
Thailand’s main stock market dropped 2.7 per cent on Tuesday. And Thai shares fell about 1.3 per cent at Wednesday’s opening on heavy selling of energy and telecommunications blue-chips.
But they recovered some ground to post a midmorning decline of 0.6 per cent at 613.28 points.
The proposed rule changes follow on the heels of much-criticised capital controls the military government imposed last month to curb the baht’s appreciation.
A string of bombings on New Year’s Eve in Bangkok that killed three people also raised investor fears.
The government has not said why it is pushing the latest measure to limit foreign ownership.
But the move is widely perceived to be a reaction to the controversial Shin Corp deal in January 2006, in which the family of Thaksin Shinawatra, Thailand’s ousted prime minister, sold a majority stake in the telecommunications company to Singapore’s state investment arm.
Thaksin was ousted in a bloodless coup in September and is living in exile in Beijing.
The government was installed by coup leaders and is expected to govern until elections scheduled for October.
Source : News Agencies 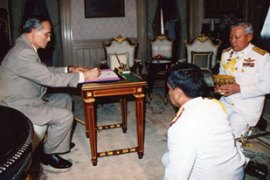 Constitution-drafting committee expected to be finalised within two weeks. 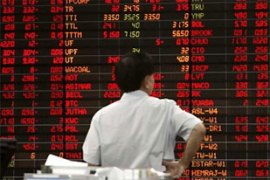 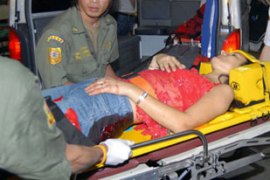 Stocks regain some ground amid warnings of damage to investor confidence.