Ba said the training camp near the borders of Pakistan, Afghanistan and Kyrgyzstan, was run by the East Turkestan Islamic Movement (ETIM).

Chinese authorities say it is one of the region’s most violent groups, labelling it a terrorist organisation and alleging that it has links to al-Qaeda.

The US has also put ETIM on a list of terrorist groups.

China has long claimed that militants among the region’s dominant ethnic Uighurs are leading a violent Islamic separatist movement in Xinjiang.

The Uighurs are Turkic-speaking Muslims with a language and culture distinct from the majority of Chinese.

Critics accuse Beijing of using claims of terrorism as an excuse to crack down on peaceful pro-independence sentiment and expressions of Uighur identity.

Chinese troops occupied Xinjiang at the end of the communist revolution in 1949, and in subsequent years the area has seen a steady influx of migrants from China’s overcrowded east. 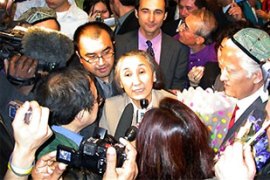