Senilagakali said the coup was necessary to remove a corrupt government, adding: “Whatever the commander tells me to do, I have no choice but to do it,” referring to Commodore Frank Bainimarama, the coup leader.
Fiji’s influential council of tribal chiefs, however, incensed by Bainimarama’s move to assume the powers of the presidency and remove the country’s vice-president from his office and official residence, has refused to recognise the country’s new military government.
It also called on soldiers to lay down their arms.
“Now is the time for you, sons and daughters of Namosi [village], to leave the barracks and return home to your people,” Ratu (Chief) Suliano Matanitobua said on Fiji radio.
Fijians were asked to wear black on Thursday to protest against the coup, while Laisenia Qarase, the deposed prime minister, called for non-violent protests.
The governments of Australia and New Zealand also encouraged Fijians to engage in passive resistance to restore democracy.
Bainimarama has warned against efforts to resist the military takeover and declared a state emergency because, he said, intelligence indicated some people were planning civil disruption.
“For those who do not agree with what we are doing, we respect your opinion, but do not interfere with the process that is currently under way.
“There is no point in debating the legality or otherwise of our actions. Qarase and his cronies are not coming back,” he said.
Officials sacked
On Thursday Troops continued to round up public officials opposed to the coup and the military chief has sacked at least six senior officials, including the country’s elections commissioner, the police commissioner and his deputy.
“We do not deny that democracy is good for the people but democracy must not be used to hide corruption,” Bainimarama said.
The military chief has declared a state of emergency in Fiji.
He has said an interim administration will steer the country to new elections, but there is no sign yet of when that administration will be formed.
Source: Al Jazeera, News Agencies 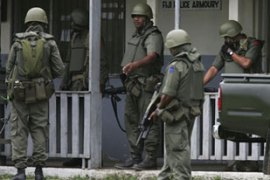 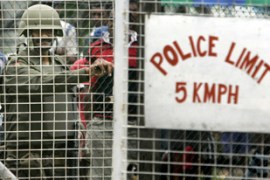 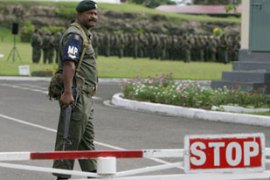