The duty was enforced as part of a move to treat the king like a “normal citizen”, officials said.
Nepal’s monarchs have traditionally been revered as dieties, but King Gyanendra’s popularity plummeted after he sacked the government early last year.
He said the move was needed to quell an anti-monarchy Maoist rebellion which has killed more than 13,000 people since 1996.
Street protests organised by Nepal’s main political parties and supported by the Maoists in April forced him to hand power back to them.
Last month, the government and Maoists signed a landmark peace deal declaring an end to the decade-old revolt.
They have also agreed to hold elections next year for a special assembly which would be tasked to map the country’s political future and decide the fate of its monarchy.
Source: News Agencies 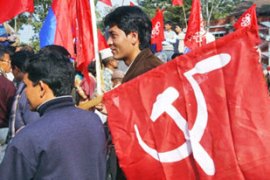 Government and maoist forces blame each other as they struggle to reach a deal.