Protests
The revision comes after several weeks of protests and violence in Bangladesh in which at least 44 people have been killed and hundreds injured.
On several occasions the 14-party opposition alliance led by the Awami League, has staged transport blockades across the country to demand changes to the electoral commission and voter list.
Sheikh Hasina, leader of the opposition alliance, told her followers to closely monitor the drive to correct the voters’ list.
She said: “Go to all election offices across the country… to make sure that only genuine voters are enlisted and ghost voters are eliminated.”
The alliance says the current commission favours the Bangladesh Nationalist Party, a four-party coalition led by Begum Khaleda Zia.
Khaleda ended her five-year tenure as prime minister late in October, handing power to an interim government, headed by President Iajuddin Ahmed, to oversee the polls.
On Thursday, the election commission postponed the elections by two days to January 23 and both Hasina’s alliance and the BNP have accepted the revised schedules.
More than 90 million Bangladeshis are currently listed as eligible to vote in the January 23 polls.
Source : News Agencies 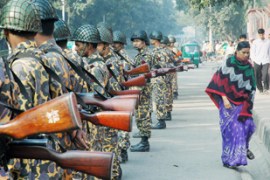 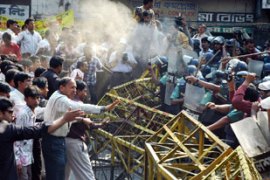