“There is a prevailing interest in continuing with the trial of the accused in order to serve the ends of justice,” the court trying Seselj said in an urgent order to the Dutch authorities.

“The trial, which is suspended until further notice, should not be undermined by the accused’s manipulative behaviour.”

It noted that Seselj had repeatedly shown “deep disregard” for the tribunal, which he has compared to “the inquisition” and called “the international bastard of the great powers”.

Seselj is on trial on charges of war crimes against non-Serbs in the 1990s in alliance Slobodan Milosevic, the former Yugoslav president, who died of a heart attack in his cell in March just months before his trial was expected to end.

Seselj has refused food and medication but is drinking water. His party says he can no longer stand upright unsupported.

Seselj was moved from the tribunal’s detention centre to a Dutch prison hospital last week and his trial was adjourned.

The death of Seselj would likely have political repercussions in Serbia, where his opposition Radicals are the strongest party with the support of roughly one-third of voters, heading for a January 21 parliamentary election.

In Belgrade, Serbia appealed to the UN court to let him defend himself, instead of trying to force-feed him.

In an appeal to the court, Srdjan Djuric, a Serbian government spokesman, said: “Approval would let Seselj defend himself as he sees fit, and it would end also his hunger strike, which would protect his most important right – the right to live.”

Seselj surrendered to The Hague tribunal in 2003 and pleaded not guilty to war crimes. He has routinely disrupted pre-trial proceedings, insulting judges.

The court said he had made “several and often changing” demands related to his hunger strike, some of which have already been addressed such as demands for unlimited visits by his wife. 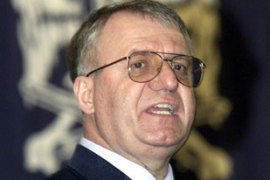 Officials say Vojislav Seselj may die before he can stand trial for war crimes.