In the first incident, one Palestinian climbed a pole near the fence while another appeared to place an explosive charge on the ground, the spokesman said.

“The Israeli force called on them to move back and fired in the air. They moved away,” he said.

“Later, several dozen people crowded near the fence, along with the same two men. One of them, using the crowd for cover, appeared to continue to place a charge. The force then fired at him, and according to our information, he was shot in the leg.”

In the second incident, near the Erez border crossing, a Palestinian crossed a perimeter fence, drawing shouted warnings from Israeli soldiers to turn back before he reached the main barrier.

“He didn’t. They fired in the air and he still didn’t stop. Then they fired at him, hitting him in the leg,” the spokesman said.

Local residents said the two men may have been collecting scrap metal in the area.

that Israeli forces have launched military operations in Jenin city in the West Bank and arrested several families.

Most of the arrested people were reported to be relatives of wanted activists of al-Aqsa Martyrs Brigades and al-Quds Brigades.

More than 30 military vehicles entered west Jenin on Wednesday and proceeded to surround houses in the area.

Israel has said that there is a Palestinian cell in Kufr Dan village that plans to carry out military attacks. As a result Israel has escalated its operations in the area.

People in the area have called, through Al Jazeera, on human and international organisations to intervene in order to free the arrested families that include old people and students. 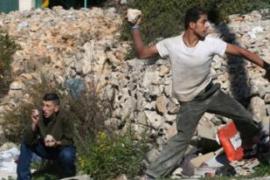 A Palestinian is killed in a raid by Israeli soldiers while a shaky ceasefire holds. 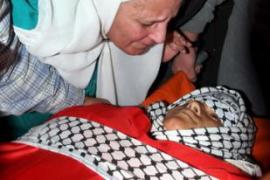 A Palestinian teenager is killed on the edge of the Askar refugee camp.