Spain already has such an agreement with Senegal’s neighbours, Guinea and Gambia.
Since September 7, Senegalese, Spanish and Italian security forces, under the mandate of the EU’s border security agency, Frontex, have conducted joint sea, air and land patrols, linking with similar EU-coordinated operations under way around Mauritania and Cape Verde.
Zapatero said: “Spain has lived too long with its back turned on Africa. Now Spain is committed to being amongst those countries which offer most aid to development in the world, most aid to Africa.”
He said his government has tripled aid to sub-Saharan Africa since taking office in 2004 to $599m this year.
Zapatero pledged to encourage Spanish companies to contract workers from Senegal and promised to help create a centre in Senegal for identifying and registering workers who wished to travel to Spain, but he insisted Spain would not set migration quotas.
Senegal’s interior minister said last month that 4,000 citizens would receive work permits over two years.
Zapatero said: “This is a guarantee of legality but there is no numeric target because that will depend on the demands of our labour market.”
Dangerous crossing
Around 30,000 people from sub-Saharan Africa have been detained in the Canary Islands in 2006 alone, five times more than 2005.
Boats are overcrowded and the crossing is often dangerous. Aid agencies have estimated that as many as 3,000 migrants have drowned on the 10 day crossing.
One immigrant interviewed by Al Jazeera said: “I had a terrible time at sea. I spent three days in hospital. It’s a terrible journey.”
The authorities in the Canary Islands have 40 days to identify and repatriate illegal immigrants but are legally obliged to free them if this cannot be done before the deadline.
Consequently many immigrants are released and continue their journey to mainland Spain.
Source: Al Jazeera, News Agencies 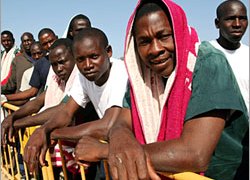 Spain will restart the repatriation to Dakar of illegal Senegalese migrants detained in the Spanish Canary Islands, a move which has sparked protests in the past.

Spain to clamp down on immigration

The Spanish prime minister has vowed to clamp down on “cheating” illegal immigrants after almost 1,000 arrived in the Canary Islands in one day.