Chaika told a news conference: “In line with international practice it is us who conduct investigations on Russian territory.
“We will do the interviewing and they [the British investigators] can only be present during the questioning … Of course, they can ask us for permission to conduct interviews, which we may or may not grant.”
The case has strained relations between Moscow and London with the Kremlin angry at Litvinenko’s death-bed claim that Putin had ordered his assassination.
Chaika dismissed speculation that the polonium 210 had been smuggled into Britain from Russia.
He said that if the detectives from London identify any Russian citizens as suspects, they will be tried in a Russian, not a British, court.
Asked about possible extraditions, he said: “This will not be possible.”
Police to date have neither charged nor identified as a suspect anyone in the Litvinenko case.
Chaika did say, however, that his officials would help the British team gain access to Andrei Lugovoy, a Litvinenko associate thought to be of interest to Scotland Yard.
Lugovoy met Litvinenko in London on November 1, the day the former spy fell ill.
Radiation was found at London’s Millennium Hotel, where the two men met.
Investigation
Russian media reported on Tuesday that Lugovoy might not be available to talk to the British detectives because he is in hospital being checked for radiation contamination.

Chaika said: “If the doctors allow it … he will be questioned without fail.”

Lugovoy later said he was keen to meet the detectives and was prepared to cooperate.
He said in a telephone conversation shown on NTV television: “If I had a chance to look up the list of people they have invited for meetings and if I see there are other names I can propose to include there, I will do so.”
Security experts say it is unlikely Putin was involved in Litvinenko’s killing, but they say it is possible that it was the work of rogue elements in the security apparatus that Russia inherited from the Soviet KGB.
Some in the Kremlin believe Litvinenko’s death is being manipulated for political capital by Boris Berezovsky, a Russian millionaire and implacable Putin critic now living in London.
Four British detectives – three men and a woman – were seen arriving at Moscow’s Domodedovo airport late on Monday.
On Tuesday they met Chaika’s deputy and another senior official in the prosecutor’s office to establish ground rules for their work, the prosecutor-general said.
Within hours of them starting their work though, there were allegations Moscow was hampering the investigation.
Russian news agencies quoted the prison service as saying it would not allow Mikhail Trepashkin, another former spy who is in prison for divulging state secrets, to meet the detectives. His lawyer said he had valuable information.
Yelena Lipster, Trepashkin’s lawyer, said: “I think in this way they [the Russian authorities] are obstructing the investigation.”
Chaika said the British team had shown no interest in speaking to Trepashkin.
“About half of all the people sitting in prisons have an interest [in the Litvinenko case],” he joked.
Muslim burial
Litvinenko is to be buried on Friday in a Muslim ceremony in or near London, his father said on Tuesday.
Valter Litvinenko said that his son had expressed a wish to be buried in a Muslim graveyard.
He said: “He will be buried Friday, I think it will be in a Muslim graveyard.”
Some of his family and some Muslim friends will be present. “It will be quite a special funeral, you understand, the coffin will be closed.”
He did not specify where the burial will take place, saying the decision was up to the police, who were likely to choose somewhere in London or nearby.
Source: News Agencies 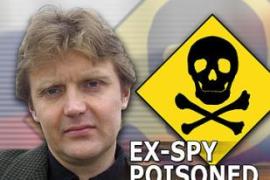