Pinochet is expected to remain at the military hospital in Santiago for the next 10 days.
He is accused of torture, killings, kidnappings and other human rights abuses during his 1973-1990 rule.
Luis Cortes Villa, a retired Chilean general and close friend of Pinochet, said: “The family is very tense, worried, but hoping that he can recover.”
Before the surgery, Pinochet was given the Roman Catholic last rites, traditionally administered by a priest to the dying.
His son, Marco Antonio Pinochet, said doctors had brought his father back from the brink of death.
Doctors said they wanted to avoid further surgery, which would be risky because of the retired general’s age.
Human rights abuse
As dawn broke, a handful of Pinochet supporters waited outside the hospital for news of the man who dominated Chilean life for two decades.
Some Chileans regard Pinochet as the man who saved them from Marxism by ousting president, Salvador Allende, in a 1973 coup, while others view him as a murderer who should be put on trial for human rights abuses.
Pinochet’s heart problems have rekindled speculation about the funeral he will be given when he eventually dies.
His supporters say he should be granted full state honours while his critics say that would be a national disgrace.
Pinochet, who is diabetic, has been in frail health for some time and in recent weeks he has suggested his end could be near.
“Today, close to the end of my days, I want to make clear that I hold no rancor toward anybody, that I love my country above all else,” he said in a statement read by his wife on his 91st birthday last month.
In the statement, he accepted “political responsibility” for acts committed during his rule.
Two days later he was placed under house arrest in the murder of two of Allende’s bodyguards.
The various prosecutors who are trying to bring him to trial complain that whenever he is detained, Pinochet’s health appears to deteriorate, allowing his lawyers to argue he should not be brought to court.
Source : News Agencies 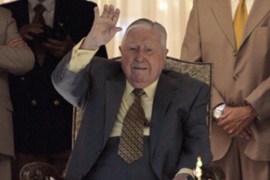 Former Chilean military ruler in a “serious but stable” condition in hospital. 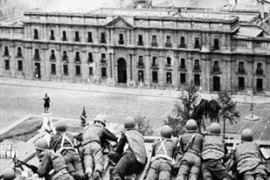 Augusto Pinochet, former Chilean dictator, has been put under house arrest for crimes including torture, murder and kidnapping in the years that followed his 1973 coup, a judge has said.

A Chilean judge has ordered the arrest of the country’s former president, Augusto Pincohet, on charges of torture, murder and kidnapping.