Correa has repeated pledges to set a cap on debt payments and boost state control over energy resources.
He has also named leftist economists and human rights workers as possible members of his cabinet after he is sworn in on January 15.
Javier Ponce, a political commentator, said: “He will be more pragmatic when he gets into power, but he will push forward a series of deep reforms that he pledged during his campaign.”
Corrupt and inefficient
Correa attracted voters with promises to help the poor with more social spending and to remove the country’s political old guard who many see as corrupt and inefficient.
Correa’s plans for a deep political overhaul through a popular assembly with powers to rewrite the constitution has worried some politicians and sparked fears that he would draft a new document to consolidate his power.
Correa could run into a fierce battle with Congress over his proposed reforms and threaten the flimsy political stability of a country that has seen three presidents toppled in a decade, experts said.
Correa’s victory bolstered Chavez’s drive to secure leftist alliances in Latin American to counter US influence in the region and export his “socialist revolution”.
Chavez, an outspoken critic of George Bush, was re-elected by a landslide on Sunday.
Source : News Agencies 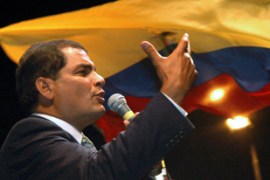 Rafael Correa is officially confirmed the new president of Ecuador. 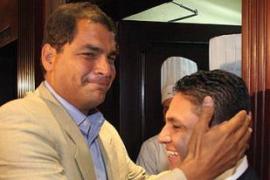 Correa ahead in Ecuador vote count 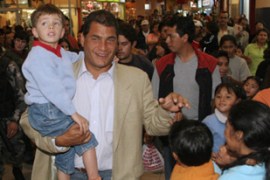