Gizenga, who came third in the first round of a presidential election in July, signed an agreement with Kabila’s political coalition ahead of an October runoff, promising his support in exchange for a guarantee that the post of prime minister would go to a member of his party.

“We have finally come back to where we were when we were pushed aside.”

He later headed a rebel government of Lumumba’s supporters in Kisangani in the country’s northeast, following a coup led by Mobutu Sese Seko.

First arrested, then driven into exile for nearly three decades, Gizenga has not had an official government post since 1960.

Until the 2006 elections, his PALU party had never held a parliamentary seat, having refused to take part in a series of undemocratic elections in Mobutu’s dictatorship, during which the country’s politics was largely reduced to kleptocracy.

The UN-backed elections were meant to draw a line under a 1998-2003 war and resulting humanitarian crisis that killed an estimated four million Congolese, mostly from starvation and disease. However, militia violence continues in eastern areas.

Joseph Kabila came to power as the world’s youngest head of state following the murder of his father Laurent in 2001. 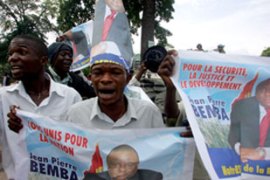 New assembly poised to take over from Congo’s transitional government..