The Eta claimed responsibility for the blast in a telephone call to the Spanish state radio.
Prior warning

Terminal Four at Barajas Airport was evacuated after an initial warning was telephoned to motorway rescue services in the Basque Country, state radio reported.

The bomb exploded at about 9am [08:00 GMT], causing minor injuries to four people including two police officers and a taxi driver, emergency services said, and sending a huge pall of smoke over the airport terminal.

Shortly after, a separate caller to emergency services said the bomb had been planted by Eta, a spokesman for the Basque regional government said.

Eta had declared a ceasefire in March after 40 years of armed struggle for independence of the Basque Country in which it killed more than 800 people.
Zapatero announced in June that he would start a peace process with Eta.
However, the group said last month that it would break off contacts unless there was quick progress in separate talks over the future of the Basque Country.
Source : News Agencies 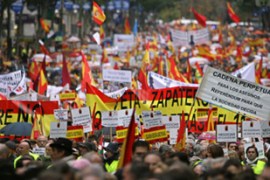 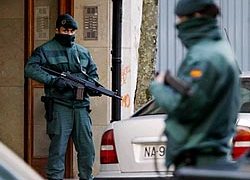