“The search will continue tonight with two naval ships,”  Hatta Radjasa, the transport minister, told MetroTV after arriving in Semarang, where  relatives searched lists of survivors.

Radjasa said “we are using our maximum efforts to rescue as many  people as possible”.

He later told ElShinta radio that the ship was built in 1990 and serviced earlier this year, “so it should not have had any problems”.

The ferry left Kumai in Central Kalimantan province on Borneo island en route to Semarang in Central Java 420km away, and sank near Mandalika island off the Java coast. It was not known exactly where it went down. 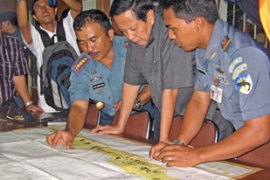