Ali Mohamed Gedi, the Somali prime minister, entered Mogadishu on Friday after a 10-day land and air offensive by Ethiopia in support of his weak interim government.

Gedi said that the fight for political survival had been won, but Islamic courts leaders promised resistance.

Gedi also called on the Islamic courts fighters to enter into a dialogue. At the same time he warned of serious reprisals if the fighters followed through on threats to launch a guerrilla campaign.
Ethiopian fighter jets were seen over Kismayu and the nearby town of Jilib on Friday and Saturday, the military expert said.
A Somali government soldier said Islamic courts fighters – accused by Addis Ababa and Washington of being backed by al-Qaeda – had sown the road from Mogadishu with mines as they pulled back.
“We are heading to Jilib in a convoy of 15 Ethiopian tanks,” Ahmednur Yasin told Reuters by telephone. “There are more forces heading to Buale and I am sure the fighting will start soon.”
A Somali government source said: “All the terrorists are in Jilib and Kismayu.”
Militia leaders
One Islamic courts fighter, who asked not to be named, said: “We will fight the Ethiopian invaders. The jihad will not stop.”
Parliament was expected to vote on Saturday to declare three months of martial law aimed at disarming thousands of men loyal to various clan chiefs and local militia leaders blamed for years of anarchy.
Gedi’s government depends almost entirely on Addis Ababa for its military muscle, analysts say, and it was far from clear how it would maintain security without Ethiopian troops.
Source : News Agencies 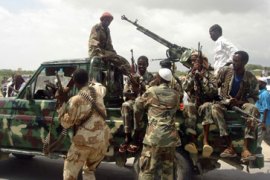 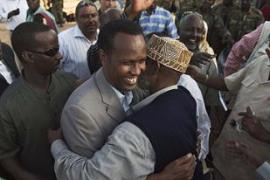 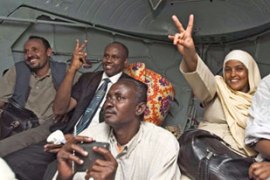