Rathore told reporters that a domestic helper charged with rape, murder and concealment appeared to be a “mentally ill” man who confessed to police he had lured and killed six children with sweets and toys.

“He says he kidnapped the children for sex,” Rathore said.

The servant’s businessman employer ,who sells earth-moving equipment, was also later arrested in connection with the discovery.

The employer was also charged with rape, murder and concealment,  Rathore said.

News reports said the victims, the children of labourers living in shanty clusters near the house where the arrested men lived, had  been sexually abused.

Ten of the 15 victims so far discovered had been identified by their parents, the police official said.

The victims were aged between six and 12.

As news of the discovery of the children’s remains spread, hundreds of relatives gathered outside the building, some waving photographs of their missing sons and daughters. 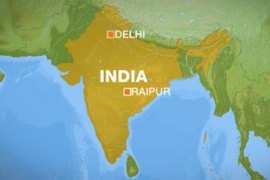 Police arrest two after decomposing bodies of children are found in a Delhi suburb.