He said: “They had promised the Somali people to defend Mogadishu to the last man, but this hasn’t happened.

“As they head for the south, the chances look very remote for the Islamic courts to assemble their fighters again in order to be able to wage any war against the Ethiopian and Somali government fighters.”

One former Islamic courts fighter said: “We have been defeated. I have removed my uniform. Most of my comrades have also changed into civilian clothes.”

“People are cheering as they wave flowers to the troops,” said one resident of the Somali capital, adding that scores of military vehicles had passed the Somalia National University.

Mohamed Jama Fuuruh, a member of the Baidoa-based Somali parliament, said: “The government has taken over Mogadishu. We are now in charge … There will be no problems and everything will be fine.”

“We are discussing what to do so that Mogadishu will not descend into chaos. We will not let Mogadishu burn,” he said in Addis Ababa.

Speaking for the transitional government spokesman, Abdirahman Dinari said that it had some way to go towards taking over.

“We are taking control of the city and I will confirm when we have established complete control,” he said.

“Our forces effectively control Mogadishu because we have taken over the two control points on the main roads outside the city.”

Later Dinari told Al Jazeera the government had declared a state of emergency “to control security and stability”.

The Islamic courts’ chairman has said that his side’s hasty withdrawal was a tactical move in a war that began last week against Ethiopian troops defending Somalia‘s weak government.

One resident said: “Uncertainty hangs in the air.” 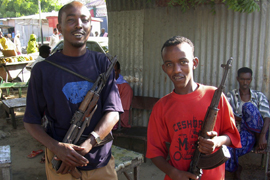 “My worst fear is the capital will succumb to its old anarchy. The government should come in now and take over – this is the best chance they have before the city falls into the hands of the warlords again.”

“It looks now that the government has on its hands a very difficult task in pacifying Mogadishu …  It looks like Ethiopian troops will be here for some time to come”.

Dinari said Yusuf Abdullahi, the Somali president, and Ali Mohamed Gedi, the prime minister, remained in the transitional government’s south-central base in Baidoa and would move to Mogadishu at the earliest opportunity.

The government has long viewed Mogadishu as too dangerous to move to, but its return would be a key step in achieving greater legitimacy.

Ethiopian-backed forces enter the Somali capital as the Islamic courts flee and looting breaks out.