When the toned-down version of Playboy Indonesia launched in April – containing no nudity – some Muslims protested against what they called the arrival of the global icon of pornography.

On Thursday, about 30 people protested outside the court and tried to force their way into the courtroom before officials intervened.

They accused the presiding judge of being biased towards Playboy, which they said had “destroyed the morals of the nation”.

Arnada told reporters that the protesters were entitled to demonstrate, but “I also ask that they respect this legal process”.

Pornographic films on video, though illegal, also are sold quite openly at stores across the country and some magazines are more sexually graphic than Playboy.

Indonesia is secular, but also has the largest Muslim population – 190 million – in the world.

Some Muslims have been pushing hard to impose strict Islamic law there.

Hundreds of Muslim protesters have attacked the offices of the newly-published Indonesian edition of Playboy magazine. 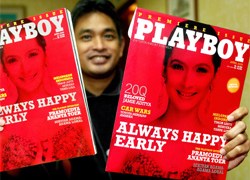 An edition of Playboy magazine has gone on sale in Indonesia despite threats of protests by Islamic hardliners who call the publication a form of moral terrorism in the world’s most populous Muslim nation.