In a four-hour tape-recorded interview in July 2004, Ford told Bob Woodward – who made his name breaking the Watergate story – that he “very strongly” disagreed with the justification for the 2003 invasion.

The former president criticised key Bush advisers and veterans of his own administration, including Dick Cheney, the vice-president, and Donald Rumsfeld, the former defence secretary.

Ford said: “Rumsfeld and Cheney and the president made a big mistake in justifying going into the war in Iraq. They put the emphasis on weapons of mass destruction.

“And now, I’ve never publicly said I thought they made a mistake, but I felt very strongly it was an error in how they should justify what they were going to do.”

The Bush administration’s initial justification for the war was that Iraq posed a threat because it had stockpiles of weapons of mass destruction. None was found.

The interview and a subsequent conversation last year were carried out for a future book project.

However, Ford, who became president in 1974 after Richard Nixon resigned over the Watergate scandal, said his comments could be published at any time after his death.

Ford was quoted as saying that he understood the theory of “wanting to free people”.

But the former president said he was sceptical: “Whether you can detach that from the obligation number one, of what’s in our national interest. And I just don’t think we should go hellfire damnation around the globe freeing people, unless it is directly related to our own national security.”

Woodward said Ford fondly recalled his close working relationship with Cheney and Rumsfeld, while expressing concern about the policies they pursued in more recent years.

Ford said “he [Cheney] was an excellent chief of staff. First class. But I think Cheney has become much more pugnacious” as vice-president.

According to the article, Ford said he agreed with an assertion by Colin Powell, the former secretary of state, that Cheney developed a “fever” about the threat of terrorism and Iraq. 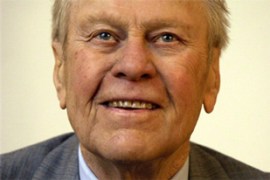