The tourists had done well in the morning session, removing centurion Andrew Symonds early for 156.

The dangerous big-hitter had added only two further runs to his overnight score before playing at a wide delivery and edging to keeper Chris Read off the bowling of Stephen Harmison.

Read, in the side at the expense of the ineffective Geraint Jones, went on to take six catches in the innings in a solid display behind the stumps.

The ultra-consistent Stuart Clark started England’s sorry demise when he bowled Alastair Cook for 20, before Glenn McGrath had the disappointing Ian Bell trapped LBW for two.

Clark then claimed the prize wicket of star batsman Kevin Pietersen, who was finally elevated up the order to number four by England – a move seemingly made as an afterthought rather than a tactical ploy.

A Clark delivery that moved off the seam had the dangerous Pietersen clean bowled for one, leaving England 49 for 3 and struggling to force the home side to even contemplate batting again.

Paul Collingwood then made a scratchy 16 before being very well caught by Justin Langer at short cover after Collingwood’s full-blooded drive was hammered straight at him off the bowling of Brett Lee.

Meanwhile, opener Andrew Strauss crawled to 31 off 107 deliveries as he tried to hold the innings together, but he finally succumbed to the pressure and played at a good Lee delivery, edging to keeper Adam Gilchrist who took a regulation catch.

England captain Andrew Flintoff must have dreaded coming to the crease with the score at 90 for 5, still needing 170 runs to make Australia bat again, and having already lost the Ashes.

Flintoff tried to play a stoic innings, but with the ball reverse swinging, it wasn’t long before Clark had his third wicket, that of the England captain LBW for 25.

Warne then moved to 706 Test wickets with the scalps of Sajid Mahmood (0) and Stephen Harmison (4), before Lee wrapped up the tail, dismissing Monty Panesar for a well made 14 and taking the final wicket of Matthew Hoggard for five.

The teams now travel to Sydney for the final Test, Warne and McGrath’s last, and a possible 5-0 whitewash for the first time since the 1920-21 Ashes series.

In another twist, Warne now goes to the typically turning SCG pitch on 999 international wickets – Tests and One-day internationals combined, to be on the verge of yet another bowling milestone.

For England, they must once again try to regroup and win in Sydney, just as Nasser Hussein’s battered team did in 2003 with Australia also leading that series 4-0.

However, with the lack of consistency, deficiencies in tactics and despondent body language shown by the visitors at the MCG, especially on day two, odds will be shortening on the first Ashes series clean sweep in 85 years. 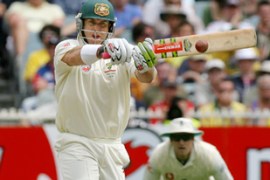 Australia are 372 for 7 with a first innings lead of 213 at stumps on day two of the fourth Ashes Test. 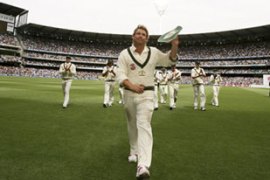 Five for Warne as England crumble

Shane Warne gets his 700th test wicket as England slumped to 159 all out.