As interim leader, Berdymukhamedov was ineligible to run for president, but the Council, a 2,500-strong assembly of hand-picked officials and elders, removed the obstacle by changing the constitution.
The council has unanimously backed his candidacy.
The other candidates are: Ishanguly Nuryyev, 51, who served as deputy minister of oil and gas from 2005; Ashyrniyaz Pomanov, 44, mayor of the town of Turkmenbashi; Mukhammednazar Gurbanov, head of the Karabekaul district; Orazmyrad Garadzhayev, 46, mayor of the town of Abadan; and Amanyaz Atadzhikov, 59, deputy governor of northern Dashoguz Region.

Exiled opposition leaders and human rights groups have voiced concerns that the election campaign will be tightly controlled and may not bring the reforms they feel are necessary after Niyazov’s 21 years of unchallenged rule.

But Kariyev has said that all candidates would have access to the media and that the election will be open to foreign observers.
Elections will be held on February 11.
Presidential elections were last held in Turkmenistan in 1992 when Niyazov was said to have won over 95 per cent of the votes.
Under the Turkmen constitution, the president is elected for five years, although the parliament abolished restrictions for Niyazov in 1999.
Opposition
The United Democratic Opposition of Turkmenistan [UDOT] said on Wednesday that its candidate, Nurberdy Nurmammedov, the leader of the Agzybirlik democratic movement, has been missing in Ashgabad, Turkmenistan’s capital, since Saturday.
Authorities told Nurmammedov’s family that they had no information about his whereabouts, UDOT said on its website.
The website reported that Nurmammedov disappeared after giving an interview to the US-funded Radio Liberty.
UDOT is led by from Norway by Avdy Kuliyev, Turkmenistan’s former foreign minister.
Gas supply
Niyazov’s death raised fears that the country, which borders Afghanistan and Iran, might slip into chaos, possibly distrubing gas deliveries to Russia.
If this was the case, there would be likely knock-on effects for western European consumers supplied by Russia.
Alexei Miller, the head of Russia’s state-run gas monopoly Gazprom which buys gas from Turkmenistan, attended Niyazov’s funeral on Sunday.
Andrei Grozin, an analyst at the CIS Institute think tank in Moscow, said: “Gazprom’s calm about this shows that during Miller’s visit, he probably received assurances that relations will remain the same.”
Berdymukhamedov, who kept a relatively low profile during Niyazov’s rule and subsequently survived a number of ministerial expulsions, has vowed to follow Niyazov’s path.
Grozin said: “Berdymukhamedov is a much weaker person than Niyazov in terms of personality, control and experience of practical leadership.”
Source: News Agencies 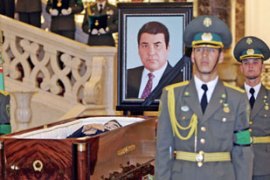 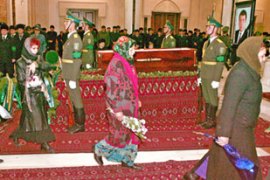 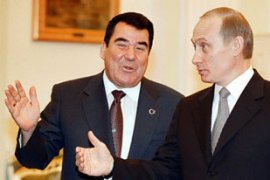 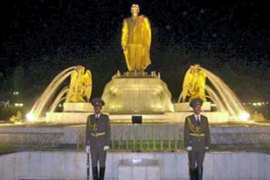