In pipeline blazes where people get burned illegally scooping fuel, many go into hiding for fear of prosecution, rather than seeking medical attention.

Abiodun Orebiyi, secretary-general of the Nigerian Red Cross, said the fire left at least 269 people dead, and said that some survivors may die from their injuries.

He said about 65 people had been taken to hospital with burns.

The pipeline, which runs through the northern Abule Egba district of Lagos, is owned by state-run Nigerian National Petroleum Corporation (NNPC).

Residents said the pipeline was vandalised before dawn by thieves stealing fuel to fill tanker trucks.

The fire, they said, started later, at about 8am (07:00 GMT) when residents arrived with jerrycans to help themselves to small quantities of fuel that were standing in pools close to the pipeline break.

Ajuonuma said the police had been directed to hunt those who tampered with the pipeline.

“The police are after them. They will be smoked out and prosecuted,” he said.

“Our security agents are advised to protect oil pipelines and other national properties and installations from vandals and criminals who steal petrol to sell.”

Ajuonuma urged the public not to buy petrol from tankers on the road, adding that the current shortages in the country should not be an excuse for people to steal fuel. 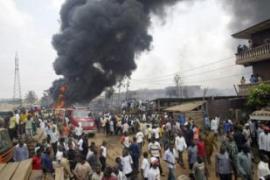 At least 269 people have died in a blaze at a vandalised oil pipeline.