VVS Laxman, paired with Tendulkar, faced 49 deliveries hitting a single boundary and was unbeaten on 10.
Gripping play
Things might have gone differently, though, as India lost their first three wickets for 61.
Andre Nel struck in his first over when Virender Sehwag was caught by AB de Villiers without scoring.
Nell then trapped Rahul Dravid lbw for 11 after lunch.
Wasim Jaffer was out for 26, his highest score of the tour, after edging a ball from Makhaya Ntini to de Villiers at second slip.
Nel had 2-26 from 12 overs with Ntini on 1-12 from eight.

He tipped over 100 in the third over of the morning when he drove Sree Sreesanth through the covers for four and found capable support from new cap Morne Morkel, but drove at a wide ball from Sreesanth and edged a high catch to Laxman at second slip.
The pairing of Prince and Morkel added 39 for the ninth wicket.
Prince batted for 316 minutes, faced 212 balls and hit 16 fours.
Morkel and last man Makhaya Ntini added another 32 before Anil Kumble wrapped up the innings when he trapped Ntini lbw for 16 with a straight ball that hurried through.
‘Cracks open’
Morkel looked comfortable, playing some fluent off-side strokes, finishing unbeaten on 31 with three fours off 52 balls.
Kumble finished with three for 62, while Sreesanth was the best of India’s bowlers with 4-109.
Looking forward to day three, Prince said: “We hope to nip a couple of them out early.”
He said: “There is still something in the pitch, and if the sun comes out and breaks the cracks open a bit, it should be quite lively on the fifth day.”
Source : News Agencies 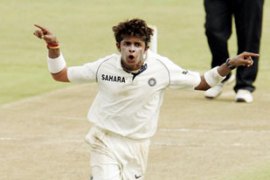 Kumble takes two wickets before bad light stops play on day one of the second test.