Tension was mounting in Najaf after an American soldier killed a senior ally of Shia cleric Muqtada al-Sadr during a raid  on his house.

A spokesman for al-Sadr’s bloc accused US forces of killing Saheb al-Amiri, a senior official, near Najaf and called for a government investigation. 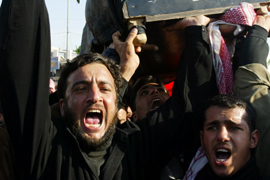 Mourners carry the coffin of al-Amiri

The US military said Iraqi soldiers with US advisers raided the home of a man who was implicated in a bomb attack on a police chief in October. A US statement said a US soldier shot the man dead after seeing him point his rifle at an Iraqi soldier during the raid.

Nassar al-Rubaei, head of the Sadrist bloc in parliament, accused “occupation forces” of storming the home of al-Amiri at dawn and killing him in front of this family.

“We call on the government to launch an investigation,” al-Rubaei told a news conference in Baghdad.

Lieutenant-Colonel Christopher Garver, a US military spokesman, said the raid was ordered and planned by the Iraqi authorities.

The US statement did not identify the man who was killed, but Garver said it referred to the same incident.

Later on Wednesday thousands of supporters of al-Sadr marched through Najaf in a funeral procession to bury al-Amiri.

The Sadr bloc, which comprises 30 members of parliament and six cabinet ministers, have been boycotting the unity government of Nuri al-Maliki after al-Maliki meet George Bush, the US president, last month in Jordan.