Jalal Talabani, Iraq‘s president, also complained. His media adviser said the arrested Iranians were diplomats not military officials and were invited by Iraq for talks.

Hiwa Uthman said: “The president is unhappy and he is talking with the Americans about it.” 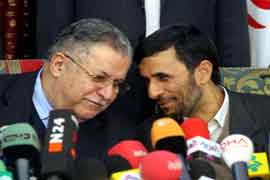 Talabani, a Kurd, is one of Iran’s main allies in Iraq. Iran backed his party’s fight against Saddam Hussein, Iraq’s former president.

Iran confirmed that the diplomats seized by the US military had been invited by the Iraqi government.

Mohammad Ali Hosseini, an Iranian foreign ministry spokesman, was quoted by the Mehr agency as saying: “This action is not compatible with international law and it will have unpleasant consequences.”

He did not elaborate.

He said: “Sources close to the Iranian government told me that the five Iranians including two diplomats were visiting Buratha mosque in Baghdad on Thursday morning. They left the mosque heading to the Iranian embassy.”

The mosque is revered by Shia Muslims.

Al-Bahrani said the men were arrested by US forces as they passed through an area controlled by Abd al-Aziz al-Hakim, head of the Supreme Council for Islamic Revolution in Iraq (Sciri).

Fadil al-Rubai, an Iraqi analyst based in Damascus, said the timing of the arrests carries several messages to the Iranian-backed ruling parties in Iraq.

He said: “Yesterday, al-Sistani, the Iranian Shia authority in Iraq, said he is not in favour of the formula suggested by US President George Bush, which calls for a new bloc made up of moderate Sunni, Shia and Kurds that would lessen the power of the current extreme rulers.

“The second message, the US wanted to tell Iran is that it has fed up with its meddling in Iraq’s internal affairs, especially after the information came after the mass kidnapping from the Iraqi Red Crescent headquarters, when some of the freed hostages said the kidnappers were talking Iranian.”

Al-Bahrani views the arrests as a bid by the US to embarrass the Iraqi government, and as a show of power.

“The US army in Iraq wants to say that, despite the increasing Iranian influence in Iraq, it is still the power on the ground, and it is capable of taking anyone.

Core of the problem

“However, this helps the Iranian position which has always stressed that the US occupation forces are the core of Iraq’s security problem.

“Had the Iraqi government had more authority to control its capital’s roads, the US forces would not be able put it in such a difficult situation.”

Al-Rubai supports the “show of power” theory, but has a different interpretation of its target.

“The US-Iran dialogue is inevitable. Maybe we cannot predict when, but it is happening, otherwise there will be a war, which is something both of them would not want.

“I believe the arrests, will not be the only US move against Iran’s interests in Iraq in the near future.

“The US does want to embarrass the Iraqi government to reassure everybody it is still the main power on the ground, but at the same time it wants to tell Iran that it cannot use its influence in Iraq against it, whether Iran agrees to talk or decides to go to war.”

Washington has repeatedly accused Iran of interfering in Iraq and aiding militias, charges denied by the Islamic republic.