Other damage included the cracking of streets and bridges and fires broke out in Taiwan. The earthquake was felt across the country, swaying buildings and knocking objects off shelves in the capital, Taipei.

But the Pacific Tsunami Warning Centre said no Pacific-wide tsunami was expected, although a local tsunami was possible.

Taiwan‘s Central Weather Bureau measured the tremor at 6.7 and timed it at 8.26pm (12:26 GMT). It was followed eight minutes later with an aftershock measuring 7 on the Richter scale.

The quake hit on the second anniversary of a massive earthquake off Indonesia that triggered a powerful tsunami in the Indian Ocean that killed 230,000 people in a dozen countries. 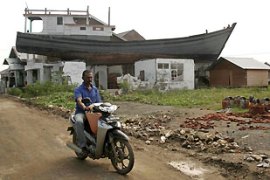