The Chinese star appeared to injure his knee attempting to block a shot by the Clippers’ Tim Thomas and left the game with more than six minutes remaining in the first quarter.

“We’re going to see how it reacts. We think he’ll do well with just rest,” he added. “An option is to do something more, surgery. We have to wait and see.”

The Rockets were already playing without guard Tracy McGrady, who has been sidelined with back spasms for the past seven games.

Houston’s record without the two stars is a woeful.

“Obviously, we needed a win and we got a major break when Yao went down,” Clippers coach Mike Dunleavy said. “The difference in the game after Yao went out is they couldn’t post us low and pass out to the perimeter.”

The New Jersey Nets are also set to struggle after an injury to Serbian centre Nenad Krstic that will rule him out of the remainder of the season.

“I went to spin, my knee twisted and I heard a pop,” said Krstic, who will undergo surgery to repair the knee.

The Philadelphia 76ers showed there is life after Allen Iverson by collecting their second straight win with a comfortable 98-77 victory over the New York Knicks on Saturday.

The 76ers shipped disgruntled All-Star Iverson to Denver earlier in week, and with the distraction surrounding his future removed they were able to focus their energy on playing basketball.

Andre Iguodala lead the way for the 76ers bagging 20 points, a night after hitting a career-high 31 in a win over the Boston Celtics that snapped a 12-game losing streak.

The 76ers took control in the opening quarter, outscoring the Knicks 26-17, then kept up the pressure in the second taking a 52-37 advantage into the intermission.

They refused to let up and stretched their lead to 75-56 after three quarters and cruised to a convincing win.

LeBron James poured in a game-high 32 points, including 19 in the final quarter, to reach another career milestone sparking the Cavaliers to an 86-83 win over the Orlando Magic in Cleveland.

The 32-point night pushed James over 7,000 career points and helped the sputtering Cavaliers to their first victory in four games.

The San Antonio Spurs rebounded from their worst loss of the season as Tony Parker scored 19 points and Manu Ginobili chipped in with 17 to beat the New Orleans Hornets 112-77 in Oklahoma City. 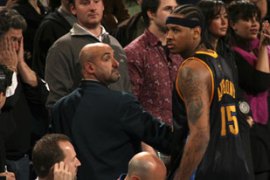 Fines and suspensions expected after 10 players are ejected.