Clinton’s report, entitled “Lessons Learnt from Tsunami Recovery”, outlines 10 areas of disaster relief that require special attention, such as the importance of dialogue with families and local community leaders to fully understand their needs.
Presenting the report at UN headquarters in New York, Schwartz said that so far donations of $12bn had been committed to recovery and reconstruction projects.
Misappropriated

But critics claim that much of that has been misappropriated, or simply not disbursed, leaving tens of thousands of survivors in crowded tent camps or temporary homes.

Corruption has also hindered reconstruction efforts, with several non-government organisations having to delay projects after contractors and suppliers ran off with funding.
Defending the rebuilding work, he said agencies including the UN had made a “greater effort to ensure accountability” than in previous disasters.
“In some countries they’ve done very well, and in others they’re still working out the kinks,” he said.
“We hope that the observations in this report … help to enhance the quality of ongoing responses in the tsunami-affected region as well as to promote more effective recovery in future operations.”
A recent investigation by Transparency International, a global anti-corruption watchdog, singled out Sri Lanka as one tsunami-hit country that has been slow to set up mechanisms to address corruption.
Instead, the group said, Sri Lanka has largely left the monitoring of tsunami funds to international and local NGOs.
Shwartz said continued violence in Sri Lanka between the government and Tamil rebels was exacerbating problems in delivering reconstruction aid, particularly in the northern and eastern areas of the country.
‘Major achievements’
In his introduction to the UN report, Clinton said the two-year recovery effort has produced “major achievements” across the regions affected by the tsunami, including 150,000 homes built, and the speedy return of children to schools.
But he said there were many lessons to be learnt. Post-tsunami reconstruction, he said, had shown  “examples of great new approaches, as well as decisions and programmes based on flawed assumptions that have caused us to lose time and beneficiaries to suffer”.
“It is critical that we pass on such lessons to actors in future recovery processes,” he said.
The report said that while aid organisations were under pressure to deliver assistance quickly in the aftermath of a disaster, it is equally important to consult with the very people in need and keep them up-to-date.
Clinton’s two-year term as UN envoy for tsunami recovery will end at the end of the year.
Source : News Agencies

The toll from the Indonesian tsunami has risen to 668 as reports of fatalities come in from remote villages.

Mourners from across the world wept, prayed and observed moments of silence along ravaged Indian Ocean coastlines on Monday to remember those killed by one of nature’s deadliest disasters. 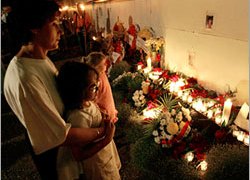 Mourners have marked the anniversary of the Indian Ocean tsunami that devastated coastal communities and killed at least 216,000 people on 26 December last year.

Top scientists and government officials from over 25 nations have launched talks aimed at setting up a tsunami early warning system for Indian Ocean countries by next year.