Letters
Abubakar sent letters to officials including Ken Nnamadi, the senate president, Aminu Bello Masari, the speaker of the house of representatives and Salihu Modibbo Belgore, the chief justice of the federation.
The letters said: “It has come to my attention that president Olusegun Obasanjo has declared my office vacant and has also announced the withdrawal of my rights and privileges as the vice president of Nigeria. The president claimed to have based his unconstitutional action on my emergence as the presidential candidate of the Action Congress [AC].”
The letters also said that the president was not entitled “to remove his deputy who was elected with him by the Nigerian people”.
He said: “The only choice available to the president… is to report me to the National Assembly or to seek clarification from a competent court of law…  I urge you therefore to disregard my purported removal from office and ensure the sanctity of our constitution.”
On Sunday the opposition AC party described the president’s dismissal of Abubakar as  “unconstitutional, null and void”.
The Sunday Punch newspaper has also reported that Abubakar may be arrested on his return from the US, where he is on holiday, to face corruption charges.
“Tyranny and lawlessness”
Abubakar had earlier been expelled from the ruling People’s Democratic Party [PDP] after he defected to the AC and was chosen as the party’s presidential candidate for leadership elections in April 2007.

He had said that he would take legal action “to halt this sad and regrettable slide to tyranny and lawlessness”.

However, the ruling party cited constitutional rules stating that the vice-president must belong to the same party as the president.
The PDP had already suspended Abubakar last September after he was indicted on corruption charges by the country’s anti-graft agency, the economic and financial crimes commission.
Abubakar, 60, publicly accepted his adoption by AC as its candidate for the 2007 poll in Lagos on Tuesday. In his acceptance speech he described the PDP as a “dying” party.
Abubakar had been Obasanjo’s deputy since May 1999, but the two men fell out over a purported attempt by the president to seek a third term in office.
Source : News Agencies 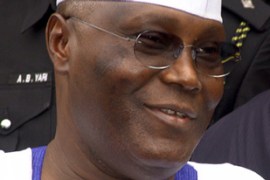 The selection of Atiku Abubakar looks set to increase political tensions in Nigeria. 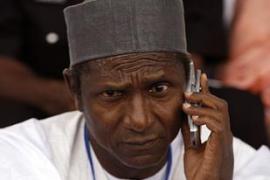 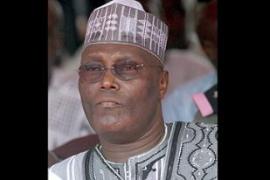 The president acts after the vice-president defects to the opposition.